Platforms get Political for the Midterm Elections

For the past few months, our social feeds have turned purple with political dialogue as the nation ramps up for the Midterm Elections. According to Politico, “A staggering 36 million voters cast their ballots ahead of Election Day this year, setting the stage for much-higher-than-usual turnout for a midterm — and, potentially, big surprises on Tuesday night.”

What also could surprise you is that social media platforms are weighing in on the race to provide election resources to users and help them identify their voting locations. 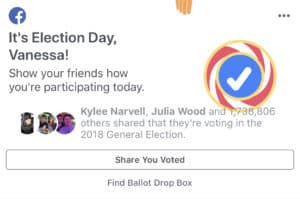 Facebook set up an election war room “focused on rooting out disinformation, monitoring false news and deleting fake accounts that may be trying to influence voters before elections in the United States, Brazil and other countries.” Facebook also placed a banner at the top of the newsfeed encouraging people to vote and find the nearest voting station. 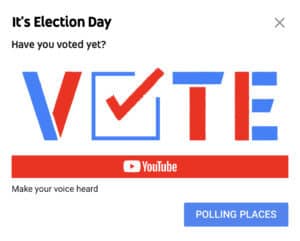 Instagram added a “We Voted” sticker for users to overlay on their voting stories. Once the sticker is added, the voting story will be added to a communal story collecting all of the users friend’s stories. Their “Voting” sticker even links out to gettothepolls.com to help users find their voting location. 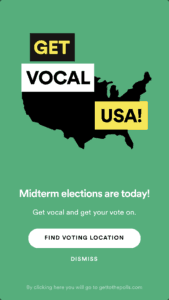 Spotify greeted its users with a full-screen reminder to get to the polls for election day and of course (do you see a pattern yet?) notified users of their nearest polling location.

To make this election more of a trip, Uber is offering $10 rides to the polls today to encourage eligible voters to get to the polls! 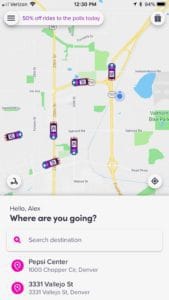 Similar to Uber, Lyft is offering 50% off rides to the polls and turned the cars within the app red white and blue. 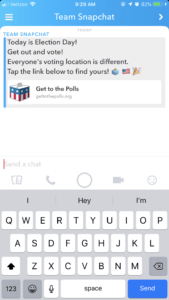 Snapchat not only sent out their typical timely snap, but encouraged voter turnout through a direct message that linked to voter locations, in addition to a slew of election day stickers for users to play with. 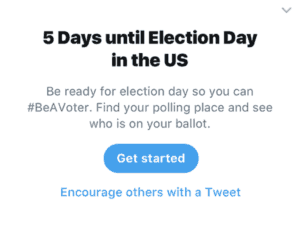 Twitter rolled out the #BeAVoter campaign by placing an election countdown reminder at the top of the timeline. The message included a "Get started" button with information about the candidates and issues on users' ballots.

Giphy made 30 election-specific gifs for social users to share and encourage their friends to get to the polls. And we must say, some of them are pretty compelling. 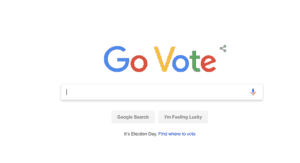 Google changed their interface to a “Go Vote” message with a link below the search bar to find voting locations.

Now more than ever, social platforms have a political responsibility to make sure that the information being proliferated on their platforms is not fraudulent. Besides the political posts dominating our feeds, the platforms themselves can have a hand in influencing not how individuals vote but whether they vote at all. Though some of the misinformation being spread across platforms may be out of their control, it’s essential they manage their messaging to be truthful and nonpartisan.

To any platform that is not taking the opportunity to spread this essential election information–our vote might just be to remove you from our roster of apps.

END_OF_DOCUMENT_TOKEN_TO_BE_REPLACED

F
Food Accounts to up your Cooking Game

U
Using Slack Communities for Brands