Trends in Food: A “New Generation” of Ancient Grains

“Ancient Grains” as a search term has steadily grown over the last decade, with the first pique of interest spurring around the same time quinoa hit the mass market (2010-2012). Quinoa is far from the only “ancient grain” out there. Ancient grains are, per the Whole Grains Council, grains that have gone largely unchanged over the last several hundred years. Other examples include spelt and kamut.

The shift from poké bowls and protein bowls to grain bowls is a small, but notable one: in past trend reports we’ve noted how meat replacements continue to rise in popularity, and grain bowls fit well into a meat-free diet.

Grain bowls are expected by many to be a top trend in 2018 but were already rising in popularity in late 2017.

Consumers are well acquainted with quinoa, but brands are bringing even more variety to the table, as they search for the next big trend. Bob’s Red Mill sells kamut, the ancient wheat of Egypt, along with amaranth and teff. Jovial Foods has a line of products made from einkorn, “the original wheat,” which is said to be tolerable by some individuals with gluten sensitivities (though not suitable for those with celiac disease). MadGreens has added a line of grain bowls to their menu, featuring wild rice, so that even consumers who do not want or have time to cook dinner can partake in the trend. Other brands with products featuring ancient grains include Made in Nature and Ancient Harvest.

What's All the Hype?

With unique flavor profiles, textures, and flavors, each grain offers something different.

Many ancient grains have a higher nutrient density than their modern kin - einkorn has 30% more protein and 15% less starch than commercial wheat, along with vitamin B and minerals such as iron.

As the meat-free trend continues, we expect many consumers to turn to higher-protein grains.

Ancient corn varieties also have different chemical compositions than modern ones. Jimmy Red Corn, which almost went extinct in the early 2000s, is rich and oily. When distilled, the oil from the corn is said to have a “marzipan and light cherry” flavor profile, and it’s now being reintroduced to the market as an artisanal moonshine.

It should be noted that due to lower production yields, these artisan grains are usually more expensive than the commercial varieties.

Consumers will have to pay a premium for ancient grains, like they do for quinoa.

The high-end restaurant scene has been looking at ancient grains for some time. As with many trends, we’re starting to see a trickle-down effect, where more mass-market restaurants are following suit.

As more restaurants and brands make ancient grains easily accessible, we expect more and more consumers to incorporate them into their diets, especially those looking for alternative protein sources.

For all you French bread lovers out there, never fear. We don't expect commercial wheat or all-purpose flour to go anywhere, as it's still quite hard to make a decent loaf of crusty bread from alternative grains. Rather, we predict more variety in the bakery, bulk, and cracker sections of the grocery store.

What Other Trends Are We Seeing This Month?

Sign up for our monthly Food Trends Report and learn about all the topics we're seeing rising to the top and our perspective on what this means for brands and consumers. 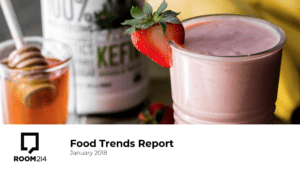 If you enjoyed this post, get free updates by email!

END_OF_DOCUMENT_TOKEN_TO_BE_REPLACED

T
The Downfall of Meat Alternatives and Sober Curiosity

T
The Rise of Meat Alternatives